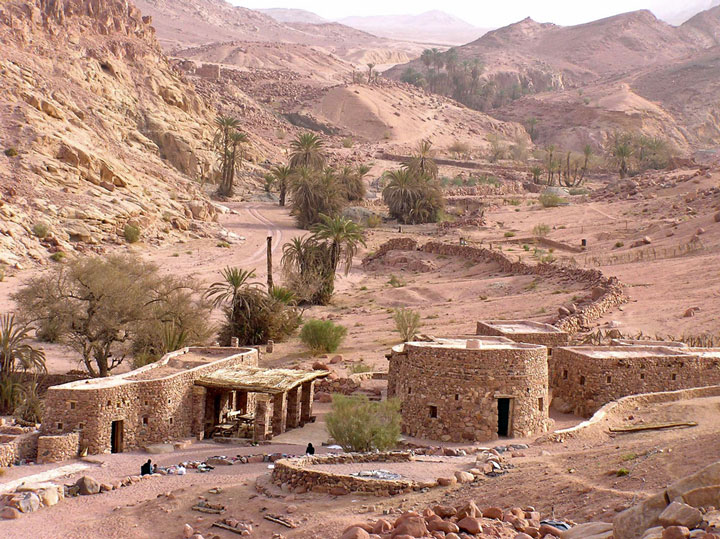 Method to Get There
4x4 advised

"After about half an hour of driving on-road then another half off-road from St Catherine's city, all worries all concerns all wants seemed distant. Now I am parking the car in elTarfa oasis where the Bedouin Taxi Jeep was waiting to get me offroading across the mountains to reach this isolated Bedouin resort with my friends. No sea nor beaches. Just the Sinai wild footpaths zigzagging between the mountains with their wild beauty to lose ourselves into with the guides from the tribe of the Bedouin manager Jameel Atteya. The Egyptian mountains seemed unreal. This is all new to me."

That's what a friend once wrote me about his experience when he first went there. AlKarm is the name of the Mountain Ecolodge in Sinai and is managed and owned by Jebaleya tribesman Jameel Atteya

and his family. It is situated in the St Kathrine's Protectorate where the Protectorate seems to have done a great deal to help them and other Bedouins there.

It's not your normal resort. While your base is at your room and al-mag3ad in ALKARM, the entire wadi gharba and surroundings (except where Homes of the tribe is) are your backyard where you can walk with your guide to fill your eyes with the remarkable views.

South Sinai mountains massif boasts some of the best all-year (but Summer remains the best season) hiking routes in the world. Not only the typical natural beauty but a significant cultural heritage is unparalleled by any other area of the world. For serious hikers and rock climbers as well as hillwalkers (sometimes called easy wadis-ramblers), the territory is vast and AlKarm ecolodge is at the center of it.

AlKarm offers a fantastic lodging in the local style and yet with all the facilities modern man needs like bathrooms and toilets and a decent kitchen. It has no electricity and mobile phones don't have coverage there. What's more is that there are no roads close by and one either has to use 4x4s or hike from the nearest town (Katrina) to it. It's managed by local Bedouins whose forefathers have settled in the land thousands of years ago. The local tribe is named Jebaleya.

Manager is the amazing Jamil Atteya who not only is familiar with all the trails and forms names but is a walking encyclopedia of Bedouin-culture who doubles for a poet.

(PLEASE PRINT THIS INFO AND KEEP IT WITH YOU. ALSO PRINT THE FOLLOWING MAP: http://ecolodges./alkarm/karmmapsat.jpg)

AlKarm is not just the 6 Bedouin houses (rooms) and their kitchen and facilities only, it's the whole valley and garden attached to it. In daytime, you don't stay in the room or just walk in between the houses (rooms), but you take walks around some of the most spectacular landscape loaded with millenia of human heritage and eons of geological wonders. This and in near place is where some of the best hikes in the world will be waiting for you under the Sun. And the most memorable star-lit sessions to chat with friends around the fire by night. The Bedouins won't be just your hosts, but your guides to the trails and enjoying the landscape.

Here are some recommended walks/treks/hikes (excluding the 'entering' walk of Nagb Haawa). They all need a guide and are ordered in difficulty from easy to harder:

-ELSADDA: nice and easy hike that is shhort and fit some afternoon for just couple of hours in wadi elGharba (same wadi that has AlKarm). It could be done if you've just checked in and wish to start in enthusiasm some exploration.

-ELKHARAZA at the feet of the 'whitish' GEBEL ELBANAT: specially nice is the easy walk on the steep sides of the smallish mountains before Mt elBanat. It gets rough if you wish to get further in elNogra.

-GRAA EL-SAF7A: couple of hours of walkk across humped hills lined by wall-like dark basaltic dikes. You reach the c. 2000 Nabatean village at the feet of a rocky hill in Wadi elSaf7a. WARNING: DON'T MOVE A PARTICLE IN THE PLACE.

-WADI ITLA7: Narrow-bottomed wadis withh amazing huge house-sized boulders spotting the sides and bottom of the wadis. You can start from Nagb Haawa and end in Seil elTal3a.

-GEBEL ELBANAT: tough hike that needs aa long day to do. You can do it in one day if you're in winter and start no later than 8pm.

-GEBEL TARBUSH: very tough one that takes frrom early dawn to evening (but easier for average hikers if they sleep a night in the middle of the way).  Needs some preparations and to reach the top you might need some skills and ropes. Might be very cold up there during winter. Could fit in 2 days hike spending the night at the Gebel.

There should be much more, when you get to know the place. All must be guided with approx LE100 per day for the guide (if you're five together it's LE20 each) plus tips. For tough hikes you pay 50%-100% more for the guide.

If you have your 4x4 and can handle sand and gravel, hire a guide from Jameel's family in the Ecolodge to:

-the Nabatean archaeological site in WAADI SAF7A: same builders who once reined from town of Petra in Jordan. Notice how they had very low doors, narrow and high windows and interestingly high walls and ceilings. Notice also the fixtures in the walls from the inside for niches, racks and how rectangular are the walls in plan and how the bricks are arranged to build a wall without mortar. See any similarity to the bedouin ecolodge?

-NAWAMIS of Wadi Slaf: 5000+ years old buildings that predates the Egyptian pyramids. First domed ceilings structures in history. Why they were built by StoneAge man, nobody is really sure. They exist mysteriously in so many places around Sinai. This is one of the least known sites in an archaeological sense.

If you wish to stay and relax, go sit in shades between rooms, behind reception at restaurant, at the orchard or downhill around the ecolodge in the Wadi elGharba (don't sit in the sun, too strong). Ask for tea with mountains mint (7abag from ecolodges orchard) or "rabel" herbal drink to be brought to you every now and then! :) Meditate, chat with a friend, read a book, or just have a nap. The weather will be just fantastic and bit 'cold' when in shade.

PRICING (always check with AlKarm for updates and let us know)

How to get there

This is for the benefit of all who like to go to ALKARM. Your feedback is always welcome.

If you have technical questions about GPS and maps in Egypt, you might like to use resources on www.SaharaSafaris.org

GPS waypoints to follow if you're coming from Cairo. Come at the road and get offroad at the waypoint XS1CAI and follow the route through Wadi Sahab to the Ecolodge. The trail follows an old phone line at its straight begining. The 'S' letter in the waypoints names indicate the wadi Sahab. K-GRDN is an intersection point of 4x4 trails. ALKARM wpt is at the gate of the ecolodge.

From Katrina it's shorter from Wadi Tarfa. Take road out of Katrina to Wadi Tarfa and get offroad at XT1KTR (near the school at some rock sign at side of the road saying Sheikh 3Awwaad) leading from Wadi Tarfa to AlKarm Ecolodge. The 'T' letter in the waypoints names indicate the route starting at wadi Tarfa route.